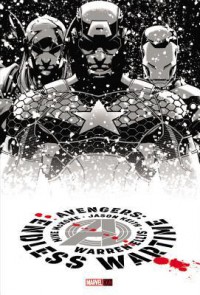 Not sure what to say about this; there are good bits, but the ultimate impression is mediocre. Possibly it's because the fight scenes bored me. A monster made of monsters and artifacts that Cap and Thor left behind has appeared in not!Afghanistan, and the Avengers need to put it down before it kills more people. It's an unofficial mission, because the US is currently aiding the resistance to not!Afghanistan's government-by-coup. It seems at first like this is going to be a much bigger plotline than it turns out to be. If there's a throughline here, it's Steve Rogers' alienation from the present day, his sense of being a ghost or a relic; and perhaps only belonging to an endless war he does not believe is endless. Ellis has to twist characters around to make his point -- not Rogers' paradoxical soldierly devotion to peace (while acting in a war), which is well-established -- but the character that suddenly becomes a mouthpiece for the Theme of Endless Wartime in the final few pages. It would have worked better as Natasha Romanov.

Eh. There are a lot of pieces that could have come together to make a powerful story, but they don't. It feels too short. It probably would have worked better with more length and more devotion to character interaction (and less to establishing background for the plot).

Artwork is fine as long as there aren't women in the scene. It's not the worst superhero objectification I've seen, but it could be better. It's the kind of story that would work for Butch Guice or Michael Lark, now that I think about it.
Tweet